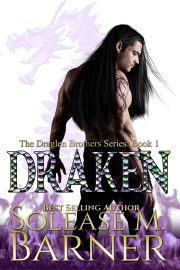 Cess Lamil is determined to get her college degree with honors and start her career. Her plans change quickly, when the new neighbors moves in down the street. Draken, the controlling and obnoxious neighbor, is all she can think about.
Despite her initial dislike, Cess feels strangely drawn to the mysterious, handsome Draken, but she soon learns that Draken has dark secrets.
Draken Draglen is in town to get the family business in order. He lives by one rule: only sleep with women of his own kind. When Cess walks down the street to introduce herself, Draken fears he is going to break his rule. He is determined to stay away from her, fearing his dark secret may be revealed, but his need for Cess is too strong. Draken makes a decision that could change not only his life, but that of his family as well.

EXCERPT:
“Hello, Cess,” Draken says, moving closer to me. I can’t move. He looks so sexy walking towards me. Everything south is wet. I feel like a fool. I can’t keep my eyes off him as he approaches me. He stands a foot away, just looking at me, gliding his purple eyes over my body. My breasts instantly harden when we make eye contact. We stare at each other without speaking.
“I was invited,” I say, finding my voice.
“Oh, well I like entertainment also, Cess, besides, remember, you owe me something,” Draken says, coming closer. I feel the need to kiss him, like in my dream. I want him.
“I, I, umm, don’t owe you,” I say, feeling really hot now. I should go.
“You owe me, Cess, and I want a dance. I hear from my brothers you can dance. Now I want a private viewing of your… skills,” he says, not stopping the eye contact.
“Draken, I’m sorry for coming to your home, I will leave now,” I say, trying to get past him, but instantly I feel his hands on my waist, holding me in place.
“You will dance with my brothers, and not dance with me? Why? I’m not as handsome as they are?” he asks, looking into my eyes, searching. I see the other brothers are not leaving this time. It’s as if they are waiting for the answer to a question, more than just a dance.
“I thought you didn’t want me at your house, now you want a dance?” I say, frowning a little.
“You have such bravery about you, Cess. Yes, I want you to dance for me, and then I will dance for you; if you don’t like it, then you may leave,” Draken says, with a small smile. Yikes, I could climax with that look he just gave me. Please don’t let me go back on my promise.
“So, what’s it going to be?” Showken says. I turn and see all eyes are on me. What are they waiting for?
“Fine, I’ll do one dance,” I say. Draken turns me around to face me, placing a very slow, tender kiss on my lips. Shit! I’m in freaking trouble.

Marilyn Carrington has been hurt by everyone who has ever claimed to love her. Now, she only trusts herself and her .45 caliber pistol. When the sexiest man she has ever seen walks into the bar where she works, she stays clear of him, ignoring his advances, but when he takes the hint and leaves her alone, she finds herself missing him. Marilyn finds she doesn’t care about the danger she senses around him; she wants to know the feeling of love again. Marilyn’s only problem now is whether Showken is really ready for her.
Showken Draglen is known for being a playboy. Loving his freedom, he has never committed to a woman, and doesn’t ever plan to. But when he sees Marilyn, he will do whatever it takes to have her. Unused to rejection, he becomes even more determined to win her. But deep down Showken knows that when she finds out what he truly is, she will run, leaving him with the only option he knows, using his power.

Excerpt:
“Uhh, no. It’s just me,” I say, really not wanting to talk about myself. “Do you have brothers or sisters?” I ask, giving him the same question to see how he likes the hot seat.
“Yes, there are ten of us altogether, nine boys and one girl,” Showken says, with a smirk. I wonder what that is about.
“Wow, your mother must really like kids. I couldn’t imagine having that many kids,” I say, taking out the butter and brown sugar for the sweet potatoes. I can’t wait to eat.
“Well, we have big families, and it’s kind of a tradition. Anything under seven is unheard of. How many kids do you want?”
I look up at him as if he’s confessed a murder.
“I will never have kids, ever,” I say, turning away from him and feeling tears building up in my eyes. I feel him standing behind me and I can’t move or speak. I turn and he pulls me into his arms, and the tears are pouring down. I’m a product of bad blood; I won’t take the risk of bringing a child into this world, knowing where it comes from. I wipe my tears and turn to finish dinner. We don’t speak again until I’m pulling the cupcakes out of the fridge.
“Showken, do you want a cupcake or two,” I say, as he has eaten everything already. After I fixed my plate and told him to eat as much as he wanted, he finished the other three stuffed chicken breasts and all of the potatoes. I couldn’t get upset, because he ate in silence and seemed to enjoy every bite.
“Yes, I’ll have one,” he says, moving to the sofa in front of the television. I see Bruiser is stuffed as he lies on his side, watching. I walk over and hand him a double chocolate cupcake; he sets it down on the table in front of him. I glance over and look at his chest, again. He has the best body ever.
“Showken, you don’t like chocolate?” I ask peeling down my cupcake paper. I take a bite, and see him watching me, licking his lips.
“Yes, I love chocolate, but I’ll wait to eat mine. You enjoy,” he says, and his eyes roam my body. I can’t eat with him watching me like this. I take one more bite, and set it down. I stand and his hand touches my knee, oh, my body is way too responsive to him. I look up and he is smiling.
“Wait, I want to eat my dessert now.” He gives a wicked smile, and I think my eyes will come out of my head. I’ve never had a guy so smooth. “Don’t I get to eat my dessert, Marilyn?” he asks, but I’m not sure why he’s asking. I know he’s speaking of something else. I’m 27 years old and I know when I see a horny man.

Reseda Fire is no ordinary woman. She holds a secret that was forced upon her. Living a double life, she catches the sight of the famous Prince Layern. Instantly drawn to him, she fights the need for more, understanding her life is not the only one she must protect. When Reseda is given the choice between love or freedom, the unthinkable happens.
Prince Layern is no longer celibate, and enjoys each day with a new lady. While on a visit with his brothers, looking for females, he spots Reseda. Her red hair excites him and he wants her in his bed. When she flees, it only encourages him in the chase. Soon, Layern finds out Reseda is more than what he has expected, and that he is now caught up in a fight he knew nothing about. Will Prince Layern betray Reseda, or follow tradition among the Draglen Brothers?

Excerpt:
“Layern, please go get some ice and a towel, please.” I look at her in amazement, she’s already had me let this human fucker in the house. I will not tend to him like a servant. “If I have to go get the ice-”

“You are going to go get the ice Reseda.” I say, through clenched teeth. I’m trying to be a gentleman, but Seda must not forget there’s only so much I will take. She glares and storms off, leaving me with this unwanted guest. I take this time for my advantage, as Seda has a soft spot for him, I will be as kind as possible.”